Gov. Nikki Haley could learn a thing or two about leadership from Batman.

“When the average citizen on the street is in peril, something must be done, and quickly,” Batman said in 1967 in episode 109 of the classic television show.

But when the private information of South Carolinians was in peril thanks to a hacker who invaded the state’s surprisingly vulnerable Department of Revenue computer system, what did Haley and company do? Wait.

Not one day. Not two. Not a week. Not even two weeks. They waited 16 days to let people know their private information was at risk. That’s longer than the entire Cuban Missile Crisis!

If you want to get some perspective about what went on from when Haley was notified on Oct. 10 that the Revenue computer system had been hacked until Oct. 26 when she and law enforcement officials came clean, click on the attached PDF that marries the timeline of what officials did after discovering the hack to Haley’s public schedule. 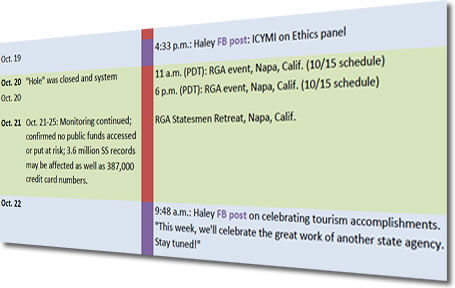 From Oct. 10 to Oct. 26, the promotion-loving governor had more than a few ample opportunities to let people know they were victims of identity theft. To wit:

Bottom line: The hacking episode that has left 3.6 million South Carolinians vulnerable to identity thieves was a crucial test of Haley’s leadership. Quite simply, she failed. She left the whole situation up to others in the law enforcement community instead of taking control. Had the media not finally caught on that something was up, we still might not know.

U.S. Sen. Fritz Hollings taught a long time ago how public officials work for the public, not for law enforcement who are investigating a problem or other government officials looking for more time.

Think back to February 1993. At that time, Hollings discovered that the Base Realignment and Closure Commission quietly had targeted Charleston’s naval facilities for closure. The official report wasn’t due for about six weeks.

What did Hollings do — wait for the report to come out? No, he got on a plane to Charleston, held a press conference and warned Charlestonians of the impending economic blow. He got criticized for letting the cat out of the bag early and lots of local officials didn’t believe him.

But he was right on the money. And he let people know quickly because he knew his duty was to the citizens of South Carolina. He let them know because it was the right thing to do. As a result, a couple of things happened. First, Hollings’ early warning forced Charleston to start dealing with the situation more quickly than other communities and they were better prepared to fight. Also, the early warning forced the Navy to back down a little, which resulted in Charleston keeping NavalEx, the highly-technological complex of engineers that today are known as SPAWAR.

Nikki Haley talks a lot about transparency. But the secrecy involving private information of 3.6 million people is about as transparent as a blindfold. She should be held accountable.

Andy Brack is a syndicated columnist in South Carolina and the publisher of Statehouse Report. Brack, who holds a master’s degree in journalism from the University of North Carolina at Chapel Hill, also publishes a weekly newsletter about good news in the Charleston area, Charleston Currents. A former U.S. Senate press secretary, Brack has a national reputation as a communications strategist and Internet pioneer. Brack, who received a bachelor’s degree from Duke University, lives in Charleston, S.C. with his daughters, a dog and a badass cat.

Brack’s new book, “We Can Do Better, South Carolina,” is now available in paperback via Amazon.