With our brother-in-law’s entire family in tow, She Who Must Be Obeyed and I had gone to spend a few hours at the High Museum of Art in midtown Atlanta on a crisp, cold December day in 2005.

The High Museum is one of the genuine treasures of Atlanta culture. SWMBO and I don’t visit as often as we should, given the fact that it is all of a 40-minute drive from our suburban manse, but the presence of out-of-town visitors is a powerful impetus to do the Things of Local Interest you don’t always make time to do.

The High had recently undergone a significant expansion, essentially doubling its size. A remarkable piece of architecture in its own right, now it was downright humongous. It took a long time to wander through it … especially given my tendency to get fixated on – or fascinated with – the various works.

The Big Exhibit at the time was a collection of the work of Andrew “Mr. Obsessed With Death” Wyeth. Crusty fishermen. Desolate landscapes. Strange-looking women with glistening eyes. Powerful art, the kind that brings out your Inner Norwegian, making you think about drinking a lot of akvavit and committing suicide.

[Well, not everybody has an Inner Norwegian. Nevertheless, Wyeth has painted a lot of windswept, elegiac works that resonate with the Rural New Englander in all some a few a statistically insignificant minority of us. Which explains why Andy Warhol made all the money and had all of those New York art scene groupies while Wyeth had cold lutefisk to eat and a weird looking, dried up neighbor lady to paint pictures of.]

Me, I wandered off and spent some time perusing the Howard Finster folk art, bizarre Local Stuff that was produced by a divinely-inspired backwoods nutcase. Finster’s work is authentically primitive, but it comes from the heart … or at least it did before the Big Art Money discovered him. Howard no longer walks this planet, but while he did, he certainly made it more interesting-looking.

As I was looking at one of Finster’s pieces – a multimedia extravaganza with woodburning, glued-on chunks of plexiglass, paint, ink, you-name-it — I was gripped by a strange sense-memory: the memory of the smell of burning wood from woodburning. It was clear, unmistakable. Who says art can’t talk to you?

I found my way to the ground floor, where there was a children’s play area – the perfect place for our little nephew to work off some energy with his Daddy. As I watched the two of them horsing around, I saw an older African-American couple with a little boy, evidently their grandson. And there was something about the man, a tall, slender, well-dressed gentleman with a trim, grey beard, that was familiar.

As I looked at the man, I became convinced that I had seen him before. Only problem was, I couldn’t figure out where, or in what context.

Was he a musician? Was he an actor? He wasn’t instantly recognizable, but there was that nagging sensation of familiarity. I was sure of it.

And so, I walked up to him. What did I have to lose?

“Excuse me, but you look like someone I have seen before, but I just can’t put my finger on where. Is it possible that I might have seen you somewhere?”

And he answered, “Yes, I suppose it’s possible. I was one of the Little Rock Nine. I’m Terry Roberts.”

Indeed. The gentleman was none other than Dr. Terrence Roberts, one of the nine African-American high school students who were the first to attend the historically all-white Central High School in Little Rock, Arkansas in 1957, three years after the Brown vs the Board of Education of Topeka Supreme Court decision that paved the way for school desegregation in this country. 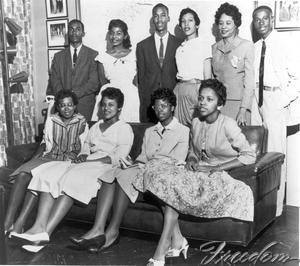 What the Little Rock Nine did took amazing courage – not only theirs, but their families’. Imagine it: the Governor of Arkansas, Orval Faubus, called in the Arkansas National Guard to keep these kids out of school, whereupon President Eisenhower nationalized the Guard, sent them back to their barracks, and ordered in the 101st Airborne Division to guard them as they attended classes. Abuse, epithets, threats, loss of family employment – all of these, these students faced and overcame.

I shook his hand. “Nowadays, people have no idea what you went through, how much courage it took. It’s an honor to meet you.”

Dr. Roberts and his wife had been in town visiting family and had (as I had correctly guessed) taken their grandchild to the High Museum. At the time he was a resident of Southern California, holding a degree in clinical psychology and a position as co-chairperson of the Masters in Psychology Program at Antioch University. He was doing management consulting work, functioning as the official desegregation consultant for the Little Rock, Arkansas School District. He and his fellow Niners had been in the papers a few months before – probably that’s where I remembered seeing him – when statues of the group were dedicated in Little Rock, an event that made the national news.

“Once in a while, I’ll be looking though a history textbook, and all of a sudden, I’ll see my face. It’s a strange feeling…”

What Dr. Roberts and the other members of the Little Rock Nine did, back in September of 1957, was an act of bravery commensurate with Rosa Parks refusing to sit in the back of the bus. Braver, even, because it was not a one-time act of rebellion, but a day-to-day, moment-by-moment ordeal.

We had gone to the High Museum to see Fine Art … but there we met a man who was a real, living part of American history. I’ll never forget it.

Steve Krodman, AKA the Bard of Affliction, lives in the steaming suburbs of Atlanta with his wife and two cats. He is partial to good food, fine wine, tasteful literature, and Ridiculous Poetry. Most significantly, he has translated the Mr. Ed theme song into four languages.