Probably the most fun a beekeeper can have is extracting honey from the hives. But since you do that only once, maybe twice, a year, you have to get your pleasures elsewhere.

You can stand there and watch the hive on a day when the bees are active. That can be fascinating.

But pretty soon, you begin to wonder: “What’s going on INSIDE the hive?”

And that’s the second “most-fun” part of beekeeping: inspecting the hives.

My friend John and I have six hives on the little farm that Sally and I have in East Tennessee. John is just starting and has two hives. I have four. Since it’s the middle of the honey season, John and I both stay eaten up with curiosity about what’s going on inside the hives, and yesterday we decided to take a look.

(We try to keep the curiosity in check during this time of year because the bees need to concentrate on making honey rather than dealing with a couple of bumbling humans disrupting their ancient routines. Still, inspecting the hives is a necessary part of beekeeping. You’re looking for problems — overcrowding, critter invasions, etc. — so that you can help the bees along.)

My first hive is a prize-winner. Rather, the queen is some kind of champ. She has been laying from the moment she was released from the cage back in April, and the hive is full of bees, and those bees are storing up a load of honey. In fact, she is making so many bees that I decided that maybe that hive could share with one of the weaker hives. So, one of my goals yesterday was to find a frame or two of brood cell to put in one of the other hives.

I did just that, and the situation in one of the weaker hives, I found, is more dire than I had suspected. Something must have happened to the queen in the weaker hive because there is some brood cell but not very many bees. I put a frame of brood into that hive, but I’m going to have to watch it closely. I may have to get a new queen before long.

My other two hives are doing well. One has lots of brood, which means the queen has been laying and the population will increase substantially before long. I’m still hopeful of getting some honey from those gals. The other hive is coming along but slowly. 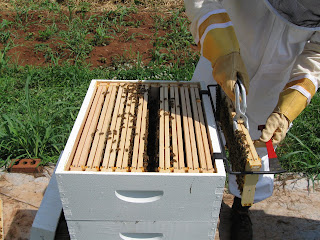 John found both of his hives in good shape with lots of bees and lots of brood. Good queens are doing their work for him. He may not get any honey this year because it’s his first year, but he should be in good shape going into the fall.

The wet weather has been both good and bad for the bees this spring. The good part is that it has produced plenty of sources of nectar and pollen for the bees to work. The garden is beginning to come in, and they should enjoy the cucumbers, beans, cantaloupes and sunflowers — among many other things available to them.

But the bees hate wet weather. The rain cuts down on their ability to forage, and it raises the humidity levels inside the hive. That’s right. The bees are far more weather sensitive than we realize. When the inside of the hive gets damp, they have to work to dry it out — the old fashion way, by flapping their wings.

That’s because the honey they’re making — in order to be real honey — has to be less than 19 percent water. It starts out as more than that, and one of the bees’ jobs right now is to get it down to that level so it can be capped. Good dry days in June help that process.

So, now that we’ve had plenty of rain this spring, pray for dry.

(And watch some video of all this at Vimeo or YouTube.)

A journalism professor at the University of Tennessee since 2006; Emory & Henry College, 2003-2006; University of Alabama, 1978-2003. Author: Writing for the Mass Media; Journalism: Who, What, When, Where, Why and How; Kill the Quarterback; The Writing Wright; (among others). Seriously: a reader, writer, gardener, beekeeper, baseball fan, Methodist