Bob WHITE! Poor Bob WHITE! That popular rendering of the bobwhite’s whistle makes a lot of sense when you realize that it’s not, after all, the call of the cock to his nesting mate, but rather the blue note of the unmated male who has somehow missed out, and who contemplates a long summer of loneliness.

Not that you’re likely to hear it at your feeder, unless your feeder happens to hang in the middle of a gone-to-seed grain field way out in the countryside. No, the bobwhite quail (or, to translate its Latin name, “the partridge of Virginia”) is our classic game bird, the plump little morsel in pursuit of which corporate titans have bought up entire counties in south Georgia and north Florida and made them over into quail-hunting “plantations”—complete with the lavishly appointed “big house,” pens of highly trained bird dogs, the standard equipage of a hunt wagon pulled by a team of mules, and a whole lot of, well, people on hand to keep the rich folks happy and the whole thing humming. The tradition was effectively mocked by Tom Wolfe in A Man in Full, where the wealthy Atlanta developer/plantation owner tells his guests he hopes they enjoy their supper because, he figures, each one of those quail they’re eating cost him about $2,500.

I went on a quail hunt once, a few years back. I didn’t feel like “a man in full”—or even “a man in part.” Mostly I felt silly. I felt silly when “Old Sam,” the hunt master who had been leading these expeditions for a couple of hundred years, immediately reprimanded me for holding my gun pointing groundward instead of skyward. I felt silly when, with too many of us to all fit comfortably in the wagon, I volunteered to ride one of the horses and when, quickly realizing that I had not been on one of his brethren in thirty years or so, the horse vetoed my every command for the next four hours. And at dinner that night, at the long, linen-covered dining room table, when the cook’s helper served the soup one person at a time, returning to the kitchen for each bowl, I felt the silly impulse to jump up and help.

I also felt silly that I knew so little about our quarry. I knew what everybody knows—that quail, like our other gallinaceous birds, live, feed, and nest mostly on the ground. Having grown up in the country, I had seen the mother and her chicks, in their characteristic single file, crossing dirt roads or skedaddling from the clacking blades of the on-coming hay mower. On the other hand, I hadn’t realized, especially after seeing them explode from their coveys and instantly disappear, that quail are actually very poor flyers—at least over the long haul. In Life Histories, Bent writes that they would really rather travel on foot, even in their mini-migrations from one feeding area to another, and that if they happen to come to a river and have to fly across, they might not make it. They even “prefer to escape from their enemies by running,” he writes, and “a bird dog will often trail a running bevy for a long distance.”

Of course, I knew nothing about the domestic relations of the bobwhite. In a scenario unusual in birddom, a month or six weeks might pass between the pairing off of male and female and actual nesting. Throughout this period the male follows the female around like a lovesick schoolboy, and, in fact, he remains a devoted husband—except in one circumstance, wherein he illustrates that some men can only take so much domesticity. If called upon to take a turn at incubation, writes one of Bent’s experts, “he appears to lose interest in the opposite sex.”

Winter is the season of the hunt on these South Georgia plantations. I believe I was there in early February. We weren’t likely to stumble across any nests. A couple of months later, if we had been diligent, and lucky, we might have found one. The surprising number of eggs—a dozen or more, maybe even so many that the mother has arranged them in two layers—would have told us what we had discovered. Maybe Old Sam would have cautioned us to leave them alone, heeding the old-time wisdom that a mother quail will abandon eggs that have been handled or disturbed.

When the time is right, the young bobwhite hatches out of its shell with the help of its egg-tooth, a bony little protuberance on top of its bill that atrophies a few days after its purpose has been fulfilled. Forbush writes that after making its initial crack, the hatchling then perforates a line all the way around so that the shell separates as if it had been cut it two with a knife, “and the struggling little chick pops out into the world.” Like other wild fowl, quail are precocial; that is, they’re ready to get up and go pretty much as soon as they hatch. (“Precocious,” obviously, is the human equivalent.) In fact, the little quail are so eager to have at it that you might see one running off with half the shell still stuck to its back.

Unless you’re on a quail hunt in February, that is, in which case you don’t get to see any of this. You do get to observe some aspects of quail behavior, though. You for sure get to appreciate that these birds are masters of camouflage. This is a talent learned early on, since chicks a day or two old are utterly vulnerable to predators, if predators can find them. In our case, we had dogs to find the birds, and of course the dogs operate by smell, not sight. It went something like this: the two pointers ranged far and wide through the broom sedge and wiregrass, Old Sam hollering out their instructions—“Ro-ah, whooee, hey, ro-ah”—in a language decipherable only to them. Periodically, not often by any means, one would come to a sudden halt, and the wagon would roll to a stop. If it wasn’t just a “kennel point” (a bathroom break), Old Sam, a gunner at each flank, would slowly approach, then whip the tangle of brush where the dog was pointing. 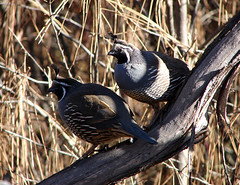 Understand: nobody ever sees the quail in hiding—not Sam, not the dogs, not nobody. Nobody is absolutely sure they’re there until the whip comes down close enough and they explode from the covey in that sudden thunder of wingbeat and flashing feather. In that instant you’re supposed to shoot them, and if you miss, too bad. Once the covey has flown and the “scent has been broken,” you’ll spend a lifetime before you find an individual bird. Not even the dogs can help you then. Some frustrated hunters claim that the single birds have the ability to “withhold their scent,” but Bent, for one, doubts any intentionality. It’s more likely, he writes, that “the rapid passage through the air dissipates most of the scent from the plumage; the birds, being frightened, crouch low on the ground with feathers closely pressed against the body, shutting in body odors; and as they have not run any there is no foot scent.”

The fact that you go out twice a day (even if you might feel once was plenty) points to another interesting facet of bobwhite behavior: they have remarkably regular feeding habits. After the sun has begun to dry the dew from the grass, they head to the nearby stubble field and feed for a couple of hours. Then they take a lengthy siesta, long enough to digest, enjoy a nice dust bath, preen, and catch a nap. About two hours before sunset they return to their feeding grounds for another meal, then call it a day. Bent says that the predictability of this pattern gives the hunter “an unusual advantage,” but our party, if it had one, made poor use of it. (Not that Bent claims it’s easy: “The man who can put two quail in his pocket for every four shells fired is a good shot,” he writes. If you quadruple the length of those odds—one quail for every eight shots fired—you’ll get closer to our ratio.)

The hunters give up as the light begins to fade, but the bobwhite have other worries, so they roost in a tight circle, with their bodies packed close together and their heads facing outward. One of Bent’s correspondents—watching, not hunting—got to observe the formation of such a circle and noted that when it was complete, two birds were left out. “One stepped up to the group,” wrote Dr. Lynds Jones, “made an opening, then crowded himself in, with much ruffling of feathers. One remained outside, with no room anywhere to get in. He, too, ran up to the circle of heads, then round and round, trying here and there in vain; it was a solid mass. Nothing daunted, he nimbly jumped upon the line of backs pressed into a nearly smooth surface, felt here and there for a yielding spot, began wedging himself between two brothers, slipped lower and lower, and finally became one of the bristling heads.”

Sadly, even this 360-degree vigilance often comes up short. Bobwhite—adults, chicks, and eggs—are preyed upon mercilessly by hawks, owls, and crows, and, on the ground, by raccoons, possums, skunks, foxes, and stray cats (which, says Bent, “should be shot on sight”). Throw in habitat destruction from “clean farming,” which kills all the weeds that supply much of the quail’s seed-eating diet, and high-density forestry, and you’ve got a tough, short life. Recent studies show that the individual bobwhite, on average, lives less than one year, and, in the bigger picture, populations are declining steadily, especially in the rapidly developing Southeast.

I didn’t know any of that, and, anyway, we were on a quail preserve, a managed plantation. So we fired away, relentlessly if for the most part futilely. Somehow, at the end of the day, shooting blindly into the noise of the rising covey, I actually hit one, and the Boykin spaniel trained for the purpose “brought him dead.” I held it limp and lifeless in the palm of my hand—a pretty little thing, close up like that, and exquisitely soft to the touch. Then I felt really silly.

From THE ARMCHAIR BIRDER:  DISCOVERING THE SECRET LIVES OF FAMILIAR BIRDS by John Yow. Copyright (c) 2009 by John Yow. Used by permission of the University of North Carolina Press.  www.uncpress.unc.edu

John Yow has written two books about birds, both published by UNC Press: The Armchair Birder: Discovering the Secret Lives of Familiar Birds (2009) and The Armchair Birder Goes Coastal: The Secret Lives of Birds of the Southeastern Shore (2012). His blog, "From Pumpkinvine Creek" (frompumpkinvinecreek.blogtspot.com) is generally concerned with the fate that awaits birds and all other species if we don't stop trashing the planet. Yow and his wife Dede live in the woods in northeast Paulding County.